Mitch Hooper was born and raised in England, educated at Windsor and Cambridge, but his career in the theatre and cinema has always been based in Paris. After studying cinema at the Conservatoire Libre Du Cinéma Français he worked as a reader for France Télévision and as reader, advisor and script doctor for various independent production companies.

In 1992 he won the Cent Premières Oeuvres award with his first screenplay, about French communists helping the FLN during the Algerian War, but the film was cancelled shortly before it was due to shoot. Further screenplays for television and cinema followed, including La Femme du Pêcheur nominated for best screenplay in the Sept d’Or television awards, a two-part period film L’Ombre d’un Crime, and an adaptation of Jean Giono’s Les Ames Fortes for Raul Ruiz starring Laetitia Casta and John Malkovich. As for theatre, he started directing in the English-language theatre in Paris but soon switched to working in French. He has written plays in both English and French. After sending one of these to Harold Pinter he benefitted from his advice and encouragement until his death in 2008. He worked as his assistant at the Théâtre du Rond-Point in Paris, and as assistant to David Leveaux on Pinter’s Betrayal at the Théâtre de l’Atelier. He has directed several of Pinter’s plays himself as well as plays by David Storey, Eugene O’Neill, David Mamet, Georges Feydeau, John Patrick Shanley and several of his own. His “l’amour existe” was broadcast live on television in his own production and also produced in Belgium and in Paris in new productions with different directors. His latest play “Only Connect” won the Figaro’s Beaumarchais award for best writer in 2013. 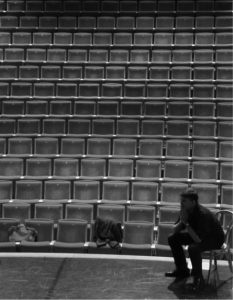