An extra-marital passion. A touch of Eros and Thanatos in the night.

Extract:
JOHN: So, what did you think of the play?

MARY: I found it dry. There was no feeling in it. That made me angry. But I wasn’t bored.

JOHN: I felt like crying out for them to stop.

MARY: No, you don’t. You think I’m off my head. But that’s what theatre is: a roomful of people who could each intervene at any moment and irreversibly alter what’s happening on stage, but who choose not to. At the cinema you can shout your head off, you can throw your popcorn and your Kia-ora at the screen – it doesn’t make a blind bit of difference. Humphrey Bogart will still say his lines in exactly the same way with exactly the same expression on his face and he’ll put Ingrid Bergman in the plane whatever you say. In the theatre even the degree of silence will affect the actor. You’re part of the show. There’s a contract between you and the actor – but a contract you can break at any moment. That’s what I like about the theatre: the sense of danger. 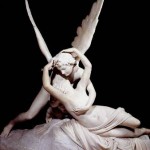